Going west as an older man 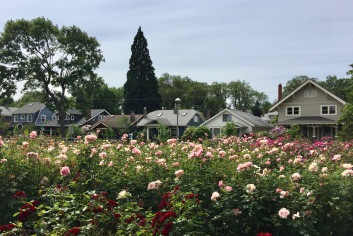 We are moving to Portland, Oregon.

For Laurie, it’s been 20 years coming (she may speak for her experience). For me, by one narrative, 11 years. So that’s where I’ll start.

As I have noted along my path, life shifted in 2007 when I took an Adventure Cycling Association tour of northwest Montana and then rode up to Logan Pass in Glacier with Harry Campbell, whom I had met on the trip. During an expense-account lunch with my colleagues Ryan Donmoyer and Tom Mullins a few weeks later, one of them observed, “You don’t give a shit about this [ups and downs of tax politics] anymore, do you?”

No. It no longer had any meaning for me. Being near the wilds in the west (and east) did. And I spent the next six years biking thousands of miles every year and making multi-day tours near and far (one from Portland to Jackson, Wyoming), thanks to the inspiration of Crista Borras and Chuck Wood.

Beginning in 2013, I engaged for three years with the Gratitude Training community in south Florida. The voice in my head grew to a roar: This is not how you want to spend “your one precious life.” But I had responsibilities – two kids approaching independence at the peak of expense. I told my boss, whom I had served as loyally as he had served me: I’m giving you my two years’ notice. When he retired a year later, I did too, certain only that my career as a handsomely paid congressional interpreter for well-heeled clients was done.

Approaching my 60th solar return, I sketched a two-month drive/bike/camp/hike tour of the West, essentially starting in Big Bend and ending in the Badlands national parks, a route I expected would have minor deviations. My intention was to follow my heart, engage in conversation, and be open to a greater awareness and understanding of my place in the world.

On the second day of the drive, I arrived in Tulsa to see my friend and adviser Arthur Curtis. Arthur had been a catalyst for me quitting my job in July 2014, and in turn I had inspired him to fulfill his promise to lead a group of friends to Peru in June 2015. In Tulsa, he advised me to let the past fall away, to understand that I had completed all of my karmic obligations, and to watch for new commitment and possibility when Laurie arrived in Seattle for our scheduled rendezvous six weeks hence.

From Tulsa, I eased my grip on the wheel. In Texas I drove to Denton, the town of my birth, for an evening with stepmom Phyllis, moving on the next morning to breakfast in Decatur with my Aunt Mary Louise and Uncle W.B., my mother’s oldest brother. I arrived to find my cousins gathering around the body of their father, who had died in his sleep. They were doing what my sibs and John and I had done 12 years earlier, the morning after W.B. and Mary Louise had paid their final visit to Mom in Austin: grieving, hugging, calling friends. We had missed breakfast, but a more perfect moment to show up for them and me could not have been. After a few hours together, I had lunch at my mother’s grave and headed toward Big Bend.

A week later, in Santa Fe, I canceled my camping reservations at the Grand Canyon. Walking by the Colorado was the priority of the trip, but my schedule was getting too crazy, so I let it go. After a week in Utah’s Grand Staircase, I changed direction again and headed for the South Rim. When I arrived at the backcountry office to ask about first-come camping space on the bottom the following night, the ranger reported: We have no camping space but there’s an opening tonight at Phantom Ranch, the century-old hostel next to the campground. I burst into tears. Later that day I plunged my hand into the Colorado, fulfilling a 38-year dream.

Many days after that (the calendar is a blur), I arrived at Yosemite and stood in line to register at Camp 4, the first-come campground that puts six people on each of a hundred walk-in sites under Yosemite Falls. Traffic was light that morning, and I got a spot. The following mornings had many fewer vacancies and many more hopeful campers. I got to climb up the falls from their base. Serendipity was becoming routine.

I rolled up the coast of California, where I witnessed on my left a crash, into the minivan ahead of me, of the BMW of the inattentive, impatient driver behind me, trying to pass us both. I was untouched. I gave the crashee my card – “I saw what happened” – and refrained from scolding the girl who’d crossed the double line in the rain, wrecking all their holiday weekend plans.

On Memorial Day in Portland, our friends Traci and Des couldn’t put me up in their overwhelmed household, so I went on Warmshowers and requested a room from hosts closer to downtown. Sure, we’ve got space, replied Tanja and Darren, who turned out to be siblings from another mother. When I arrived, Darren led me on a bike tour of Mt. Tabor, the Springwater Trail and downtown. I spent the following two days biking all over Portland:

Portland has pretty views, and I took a few pictures. But what captures me is the vibe, and I have no images for that. A warehouse in town that sells reclaimed wood. Bike shops that offer you coffee when you walk in. Blocks with clusters of parked food trucks. A forest park on the edge of the city I could get lost in. Neighborhoods with modest frame houses enveloped in gardens. Bicyclists everywhere. I take a trail north to the Columbia, and there’s Mt. Hood to the east.

I’ve been here three times over four decades, in May and June, and it’s never rained. I have no idea what I’d do for a living, but I have no idea at home either. I meet a friend for dinner who left Washington 16 years ago. He hasn’t aged a day. Laurie almost moved here, before life took her to DC. So it’s a thought.

After a hike up Mount St. Helens, I drove on to Seattle, where Laurie would arrive overnight. We spent Friday walking the downtown. In a shop, I gazed at a map of the Pacific Northwest and felt my throat tighten and my chest expand. This is where, in this moment of my life, I am to be. Walking in the mountains. Camping in the Columbia Gorge. Climbing to the St. Helens caldera. Standing in the bracing wind off the Pacific. Hiking Rainier and Hood and Adams. Returning to Yosemite and Tahoe and Yellowstone. And most of all, absorbing the vibe of Portland in its walking/biking/Powell’s-browsing/coffee-drinking/beer-quaffing/brunch-loving glory.

We had planned to spend four nights in a city neither of us had visited, but at dinner Laurie said, Well, if we want to move to Portland, what are we doing in Seattle? Saturday morning we drove south. I texted Tanja: Would you house us for two nights? She wrote back “of course,” with the name of her realtor. Sunday night we wrote an offer on a dream house.

We didn’t get it – which makes the process of moving less stressful. We will focus first on selling our home in Arlington. I’ve flown home to attend to it, leaving my car at Tanja’s. And then I’ll finish something like the sketched route east, in reverse, in Laurie’s car.

I’ve lived in Washington and Virginia for five of my six decades. I love the city – its vibrancy, seasons, nearby mountains. The museums, neighborhoods, Rock Creek Park. I love Arlington. I love our home, a bungalow and gardens typical of Portland.

My deepest thanks to my comrades in grassroots politics: Brian Cannon and my friends across the region in OneVirginia2021, WofA’s executive committee and membership, Indivisible Arlington, Arlington Democrats. The friends with whom I served the Unitarian Universal Church of Arlington, where Laurie and I met 16 years ago. All have been richly rewarding.

I will miss it all. But as John Muir wrote of Yosemite’s mountains: Oregon is calling, and I must go. 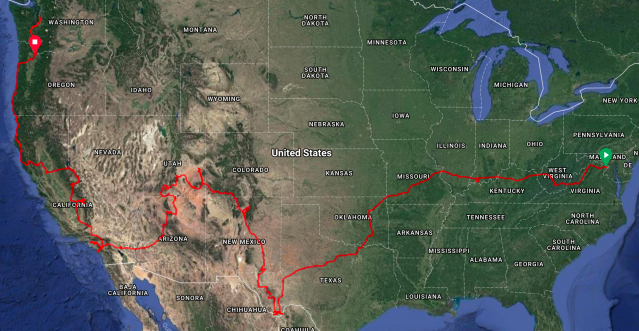 My route, from April 23 to June 3, ended earlier than planned.

This entry was posted in Uncategorized. Bookmark the permalink.

7 Responses to Going west as an older man